The Growth of the World Population

The world population is the number of people living on the earth. By now, the estimated number is at 7.058 billion according to the United States Census Bureau (USCB). The total annual births were highest in the late 1980s - about 138 million - and are expected to remain essentially constant for the next decades. The global population is estimated to reach between 7.5 and 10.5 billion by 2050. Some experts are concerned about the sustainability of further world population growth considering the growing pressures on the environment and global food supplies.

The European Union forms 11% of the global population which is 731 million people according to the United Nations. This number increases by 0,21% each year. Stating perfectly correct data is difficult because one has to put into consideration what exact definition of Europe is given. Pointing out to statistics within the geographical borders of Europe might be completely contradictory to numbers of simply the European Union. The same thing happens when defining the “Third World” as a set region; therefore we are unable to quote exact rates. Only the United States can be defined clearly with a population of 314,907,000 people which represents Americans with 4,5% in the world. Annually a growth of 2.5 million people, which is 0,91%, is registered including the immigration towards the US from all over the world. Being the representative for a developing country, Ghana’s population grows by 1,79% each year. Germany’s barely existing growth has its cause in the increasing trend of one-child families as well as the given condition of more people dying than being born.
The reason for those numbers is not only the cultural and traditional diversity of the family foundation but also globalization. Families in countries like Ghana or India suffer from the exploitation of the Western World in many different ways. Most of the time the parents’ income is insufficient to cover all monthly costs and therefore more family members –children- who earn money are needed. That is why some families in Africa have up to 15 children. Furthermore, not having any kind of access to contraceptives or not being allowed to use them is another factor of why the population is growing more in not industrialized countries. Arabic men for example usually marry more than one woman in order to have as many children as possible. Of course a woman in Saudi Arabia would therefore never get the permission to be put on birth control. Many different components contribute to this emerging problem but overall, as a general statement, the connection between education and fertility rate is conspicuous. Experts found out that commonly women who are more educated tend to bear fewer children than uneducated ones living in rural areas in tremendously bad conditions. 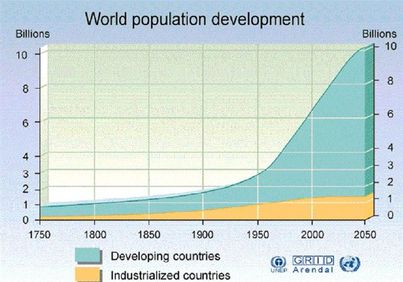 China - the Most Populated Country in the World 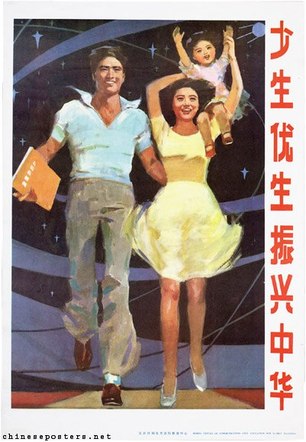 China is the world’s most populous country with over 1.3 billion inhabitants. This amounts to one fifth of the world’s population. When China took its first post-1949 census in 1953, the population stood at 583 million. By the fifth census in 2000, the population had more than doubled, reaching 1.2 billion. By now China’s population growth rate is at 0.47%, ranking 156th in the world. The fast-growing population has been stopped by a number of family planning and population controlling campaigns or programs. In the early 1970s, the government announced the one-child policy because the Chinese were multiplying so rapidly. From then on married couples were officially permitted to have one child only. There are a few exceptions such as for single children, ethnic minorities and couples who live in rural areas - these people are allowed to have more than one child. In 2012, Chinese women had an average of 1.55 children, whereas the average in 1971 used to be 5.4 children per woman. The most commonly known problem this one-child policy contains is the development of a single-child generation and the overaging of society, which leads to more problems concerning pension and health care. A further future challenge will be the gender disparity. According to the 2010 census, males account for 51.27% of China’s 1.34 billion residents, while females made up 48.73% of the total. Many pregnancies with female embryos get aborted just as in plenty of cases families proved the importance to give birth to a boy, rather than a girl, by killing their own newborn child.
And even with the one-child policy in place, China still has a million more births than deaths every five weeks. 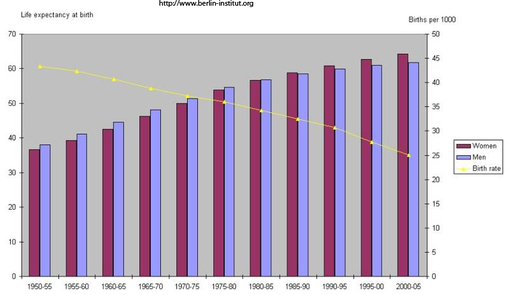 1,220,200,00 people live in India in 2012. With a birth rate of 22.22 births and 1.4 deaths on 1000 people the overall growth rate is at 1.41%. India's population forms more than a sixth of the entire world's by also being the second most populous country right after China. Experts estimate that by 2025 India will surpass China as the region with the largest population rate and that by 2050 the number of inhabitants will hit the 1.6 billion people mark. As 50% of Indians are below the age of 25 as well as 65% being younger than 35, expectations that by 2020 the average age will lower to 29 years are not unlikely. Due to this immense rise, which is connected to increasing poverty and social inequality, the government passed a "National Population Policy". In contrast to the One-Child-Law in China, Indian couples are not forced to pay any sort of fines for establishing larger families but the policy's goal is to halve the women's fertility rate and to educate society. In addition, politicians aim to draft some sort of law, which prohibits women under the age of 18 to get married or to be more precise: to ban the practice of rather elder man espousing girls under the age of 18. Being a rather traditional country, young Indian girls or women would then be more unlikely to conceive a child before having been married to a man. A further goal is to enhance the usage of birth control or any other kind of contraceptive and to teach females how to properly use those remedies. Overall since the existence of growth controlling laws in India there have been improvements such as the diminution of the average family size but many betterments have still to be made in order to really be in control of the enormously growing masses.

The effects of human overpopulation are multiple and threatening. Every single person on earth has to bear and live with the consequences the growth of the world population has brought us. One of the biggest problems is, as the birth rates are climbing, that natural resources get used up faster than they can be replaced. Other than that, overpopulation can lead to hunger, poverty, unemployment and the increasing existence of slums. Associated with the enormous growth of population there are a lot more aspects to point out: