The rainforest - destruction through globalisation

Rainforests are a vital element for our earth. They are a biological treasure.
The rainforests are spread around the equator, in South America, Africa, Asia and Australia.
They do not fascinate just with their beauty, they are also the home of many animals and plants. 90 % of the hitherto known animal and plant species live in the rainforests. Besides that it is also the homeland of numerous indigenous peoples.
Once the rainforests covered 14% of the earth's land surface, today in the 21st century the percentage amounts to 6%.

But the question is how it came to this huge loss of area
In the course of the 20th and the 21st century, in the era of gobalisation, things radically changed. The rainforest is eradicated more and more by the humans, sans regard to the consequences for nature, animals and humans. The eradication of the rainforest will have enormous results, since countless vital elements of life are located there.

In the last few years many foreign enterprises colonised the rainforest areas because the production of various goods is cheaper in newly industrialising countries and in developing countries than in industrial ones.
For example for the furniture - or the paper manufacturing industires a huge number of trees were deforested. Especially the industrial countries are responsible for the enormous paper consumption.

Deforestation of the rainforest 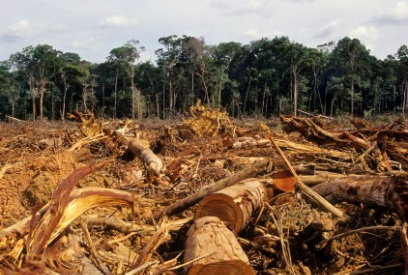 http://c.suite101.com/files/styles/article_full/public/000/032/000032810.jpg
Furthermore, huge areas of the rainforests were cleared for oil production and other resources. Palm oil for example is one of the most important resources worldwide, it is used in 90 % of the food and also in cosmetics and cleaning agents. The rainforests in Indonesia and Malaysia are nearly deforested completely by palm oil plantations. For the agro – energy, which should be sustainable, palm oil is used too as well as ethanol ( E 10 ) which is won from sugar beets.
Currently, for the “new car mart” aluminium is won from bauxite mines in the rainforests. The aluminium – carrosserie for the new cars should be ecologically beneficial, because through the lightweight construction the cars should waste less petrol. Another big problem is the animal husbandry for which also huge forest areas were cleared. A global company which supports this process is McDonald's. The meat for their “hamburgers” and “cheeseburgers” comes from animal husbandry in rainforests. 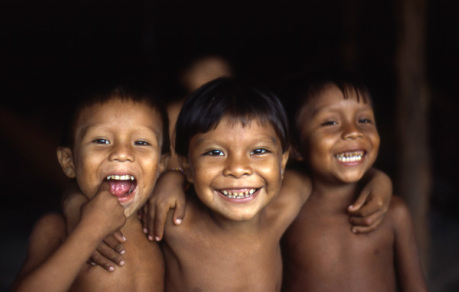 http://connectwithculture.files.wordpress.com/2012/01/yanomami21.jpg
In order to transport all these products around the world it is necessary to build long streets and canals across the rainforests.
A new project plans to build streets and canals on the river Putuyama in Equador, Peru and Colombia. These traffic connections are to link the Amazon Basin via the Andes Mountains with the Pacific Ocean. In such huge interventions all animals and plants of the affected area die.
What many people do not know is the fact that with globalisation and the associated eradication of the rainforest even humans suffer, first of all the indigenous peoples.
Many of them have to leave their settlements and villages for international concerns, which use these places for production.
Mostly the indigenous peoples were banished forcefully from their home like it was at the time of colonisation.

Therefore globalisation also stands for the destruction of an environment and its inhabitants. In order to avoid this process it is important to be conscious of our consumer behaviour.
I don't think that anyone wants to live at other people's expense.

But if deforestation goes on as before experts estimate that the rainforests will disappear in the next 40 years..