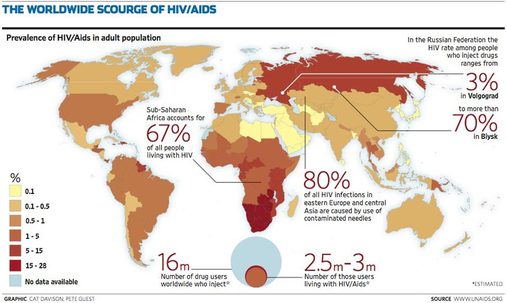 http://static.guim.co.uk
AIDS is the short form of Aquired Immune Deficiency Syndrome, which is a disease of the human immune system. The disease is caused by the human immunodeficiency virus, for short HIV. There are two types of HIV, HIV-1 and HIV-2. HIV-1 is more easily transmitted which is why it is globally spread.
In 2010, about 34 million people worldwide were infected with HIV.
As the data on the left shows, especially people living in Third World countries like in Namibia and Botswana are affected.
In Namibia for example, 85,000 children have lost their parents through AIDS. It is assumed that right now, about 230,000 Namibians are infected with the deadly virus.
Especially in Third World countries the situation is very bad because of the missing sex education. HIV is transferred through unsafe sex. Because people in those countries don't use condoms, the virus spreads very fast.
Another thing that makes it easy for the virus to spread is poverty, which makes people prostitute themselves.

It is believed that HIV originally came from non-human primates in West-central Africa and that the first humans were infected with the virus in the early 20th century. In 1959 the first case of HIV in a human was documented in Congo. It is believed that HIV was brought to the U.S. in 1969 by one single unknown person who infected himself in Haiti. About ten years later in 1978 it was suggested that several thousands in the U.S. had been infected. 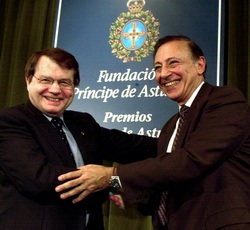 http://www.fpa.es
Luc Montagnier (the man on the left in the photo) and his team were the first ones to isolate the virus in May 1983. They are believed to have found the cause of AIDS.
The man on the right is Robert Charles Gallo, an American biomedical researcher. He played an important role in the discovery of the HTLV-1 and HTLV-2, which were redefined as HIV-1 and HIV-2 later on. He confirmed the discovery of the virus in May 1984.

In 2008, Montagnier was awarded with one half of the Nobel Prize in Physiology or Medicine for his great discovery. Gallo did not get awarded.

How it is transmitted

HIV is transmitted through three main ways. One is unsafe sexual contact. One can also infect oneself by exposure to infected  body fluids or tissues. Infected mothers can transmit the virus to their baby during pregnancy, delivery or breastfeeding. There is no danger in getting infected if exposed to feces, urine, saliva, sputum, nasal secretions, tears, vomit or sweat unless there is any blood appearing.
Groups which are especially endangered are homosexual men, recipients of blood donations, Haitians and intravenously injecting drug addicts who share needles. 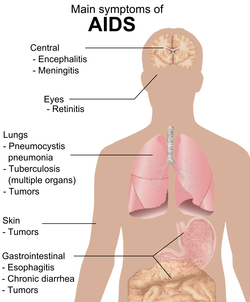 http://upload.wikimedia.org/
AIDS doesn't really have obvious symptoms. It weakens the immune system which leads to infections caused by germs which can normally be fought off by a healthy immune system.
Once the immune system is weakened, those infections lead to a wide range of symptoms.
In the acute phase, which is normally 3 to 6 weeks after the infection, patiens suffer from flu-like symptoms like fever, exhaustion, headache, loss of appetite, nausea, skin eruptions and weight loss.
Further symptoms can be viewed in the picture on the left.


Prevention
One should never have unsafe sex with unknown people if there is no time for an AIDS test.
The most common prevention is the use of condoms, which ensures a safety of nearly 100%.
For drug users the use of one's own needles is advisable. Also, if you are an infected woman, you should consult your doctor if there is the wish of having a child.

One possible therapy is the Highly Active Antiretroviral Therapy (HAART). It is a combined therapy consisting out of three antiretroviral substances, which delays the onset of AIDS. With the therapy, the immune system is strengthened but the HI virus can't be removed from the body.
There are two more experimental therapies, but they are still being researched.

AIDS is a global problem, just like climate change. The number of new infections rises every day and not only in Third World countries, but also in East European countries because of the social breakdown after the end of the UdSSR. Especially in Russia, where AIDS is a taboo, doctors are badly informed about the virus and there is no such thing as anti-AIDS campaigns.
The huge problem is that people all over the world, not only in Third World countries, are not educated enough or refuse to accept the fact that AIDS is a global problem, also in developed countries like European countries or America. 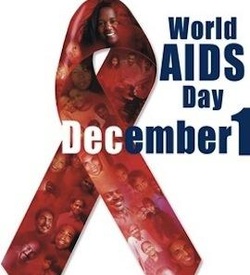 http://www.thefix.com
On World AIDS Day, which is every year on 1 December, people all over the world show their unity in the fight against AIDS. It is to show support for people who live with the virus and to remember the ones who died. The first World AIDS Day was held in 1988. It was the first global health day in history.