The first things that come to our mind when we think about travelling is relaxing, getting to know other countries and cultures, maybe spending some quality time with our family and friends and escape from our daily life. If we, however, think more closely about it, we will also see disadvantages of travelling as well. Due to globalisation travel has changed tremendously over the number of years and created a lot of opportunities and different ways of travelling.

The concept of travelling and having holidays is a relatively new invention and has developed and established itself in the last 200 years. Back then only rich people were able to afford a trip to other far located places. Nevertheless, globalisation has impacted travel in such a way that almost everyone in the world apart from third world countries is now capable of having holidays at least once a year.

Relaxing travelling is likely to be the most stress-free and therefore most popular type of travelling, describing every kind of trip intended to recover oneself. Conspicuously, this kind of travel enjoys great popularity among people of all age groups and family statuses.  Especially families tend to go on a relaxing holiday, as many companies offer daycare and all inclusive packages which simplifies the work for the customers.

The process of globalisation, furthered by easier and cheaper transport options has had a serious impact on popular destinations, as well as their cultural backgrounds. The face of travel and its purpose has changed entirely. Whereas travel in past decades used to have educational motives, its contemporary function enfolds mostly commercial aspects. But why is that the case?

The increasing usage of the internet has given us the opportunity to access information much more easily than previous generations. Whilst sources of knowledge were hardly reachable back then, the internet enables fast and easy access to education. Hence our urge for education, travels ??? decreases permanently and supports the capitalist ideology by commercialising travelling. Thus, popular destinations, for instance Mallorca adapt to our new ways of thinking, taking over German language, music and values due to the many visitors from that country. As a result of that, new markets are devloping and new jobs are created. 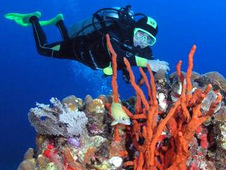 Another kind of travelling which gets more and more popular, especially among younger people, is “Adventure Travel”. It includes physical activities, such as biking tours, motor cycling as well as near-natural activities like fishing and snorkelling. Thus, almost 70% of travellers surveyed in the Adventure Travel Study 2005 by ATTA plan to undertake an adventure vacation in the near future. There are various reasons for the increasing numbers as well. On the one hand people have a more disposable income and therefore more options and on the other hand they grant us space from our ordinary and bureaucratic lives.

Furthermore, adventure vacations may contain cultural shocks, as the so-called “Ghetto Tourism” gets more and more popular. These are trips to impoverished regions where you get to know the downside of the large disparity between rich and poor. 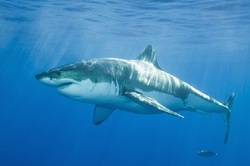 Everyone who goes on a holiday with their friends or family rarely takes into account what kinds of dangers they might face in a completely different country with different habits and health conditions. You hear countless reports about robbed or even kidnapped tourists in the area of Africa or even dead tourists in Mexico because they became part of an illegal business transaction, e.g. with drugs. Furthermore, a lot of people get infected by various viruses and infections without even knowing it until they become life-threating. Shark, snake or even jelly fish attacks in Australia could make your stay not very worthwhile. Therefore you should do some research before going to a diffferent country and if necessary you should also seek a doctor for immunizations against different diseases. You should also be aware of political turmoils and try to avoid them (for instance Syria).

On the bar chart below you can see the development of the outbound tourism in China rising over the last years. This, however, is not the only case for China. Nearly all emerged market countries have got similar figures. 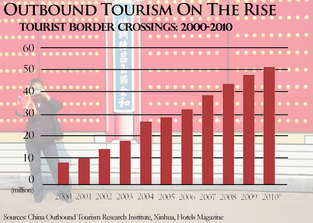