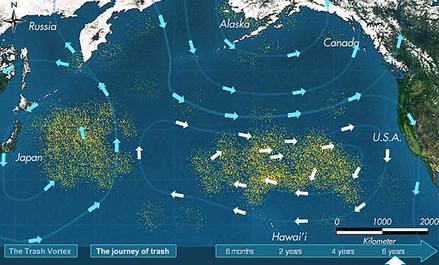 http://nakedmaninthetree.files.wordpress.com/2008/06/trash-vortex.gif
The Great Pacific Garbage Patch is a cluster of mainly plastic waste in between North America and Asia gathered by certain ocean currents and kept there by the so-called North Pacific Gyre.
The size can only be estimated since the plastic decays into tiny particles which cannot be seen with bare eyes or be detected by aircraft or via satellite. Its borders cannot simply be defined because the concentration of plastic particles varies throughout the water which makes it hard to draw a definite line between plastic-polluted water and clean water. Additionally, it is yet to be determined how high the concentration of plastic in water can be in order for it to be called "clean". There are different estimations about the size of the Great Pacific Garbage Patch which range from 700,000 km² to 15,000,000 km² up to twice the size of the continental United States.
Its emergence was first predicted in 1988 by the National Oceanic and Atmospheric Administration (NOAA) of the United States having measured the amount of plastic floating on the surface of the North Pacific Ocean for three years. The total weight of the plastic in the North Pacific Garbage Patch is estimated to be 100 million tons. 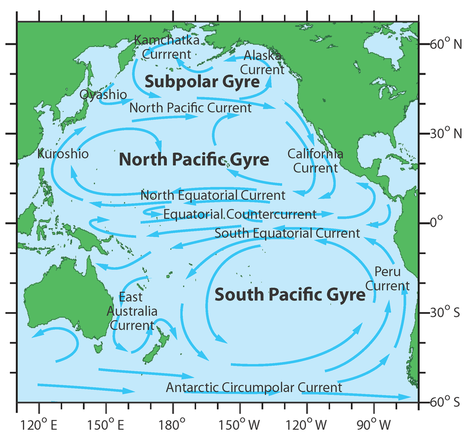 http://www.seos-project.eu/modules/oceancurrents/images/gyres1.png
As can be seen in this picture every single current is (or might at some point be) leading into the North Pacific Gyre.
The California Current, the Alaska Current and the Peru Current ensure that all the waste from Canada's, North America's and South America's western coast is taken to the North Pacific Garbage Patch while the Oyashio, the Kuroshio and the East Australia Current account for the same thing happening on the eastern coasts of Oceania and Asia. Additionally, the map shows that for the plastic there is practically no way out of the Pacific Ocean and the Antarctic Circumpolar Current even brings in more garbage from all over the world.
If you compare the North Pacific Gyre to the South Pacific Gyre you will eventually come to the conclusion that there must also be plastic gathered in the South Pacific.
Not only that but there are many small clusters of marine debris throughout the Pacific Ocean.
In fact there are far more so called 'Plastic Islands' in the seas of the world.

Currently there is solid evidence of two big 'Plastic Islands', the Great Pacific Garbage Patch and another one in the Atlantic Ocean.
But a group of scientists that watches the five major gyres of the world stated that it is very likely (it probably already happened) that other clusters of plastic waste gathered by those five gyres.
Also high concentrations of plastic particles in smaller gyres show that there are many smaller patches.

At an approximate estimate only 20% of the pollution comes from ships and 80% of the garbage in the North Pacific Garbage Patch from land-based sources with most of the garbage being taken to the seas by the big rivers of the world (e.g. the Ganges in India).
But also smaller rivers contribute to marine pollution as well as factories and cities along the coast. 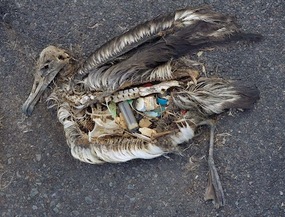 http://media.tumblr.com/tumblr_mc2pghfejh1ro1jah.jpg
Many animals are strongly affected by this pollution. Often the plastic ends up in the stomachs of the animals inhabiting this area.
The small island Midway Atoll for example accommodates around 1.5 million albatrosses of which nearly all have been found to have plastic in their digestive system. The plastic can react with organic material in the water and form toxic substances. The birds either mistake the bigger pieces of plastic for food or ingest the microscopic pieces through the water and, which is even more shocking, is the fact that approximately one third of the baby albatrosses die due to having been fed plastic by their parents.
The bigger plastic particles form a artificial home for certain species of crab which are not indigenous to the open seas and that way the whole eco-system of this area is changed.
Also fish are naturally afflicted by these toxic particles and since their stomach simply cannot digest the plastic particles and humans eat fish the toxic particles consequently end up in our systems as well. One might say something like 'well just do not eat fish from this area then' but the Great Pacific Garbage Patch is by far not the only plastic-polluted area in the oceans of the world and research has shown that currently at least 267 different species of animals are affected by marine debris. As the production of plastic continues, more and more of it will end up in the seas and Midway Atoll will certainly not be the only island without healthy animals.

Of course it is forbidden to transport plastic garbage by ship into the oceans. Commercial ships are committed to keep a “garbage-diary”, so they must mention every piece of garbage in a book. When they arrive at the mainland the duties??? are controlled in detail and if something is missing those responsible will have to pay a fine. Additionally, there are many organisations which care about the dirty oceans and independently fight against the garbage patches.

gyrecleanup.org
The Environment Cleanup Coalition was established to fight against the North Pacific pollution. Richard Sundance Owen founded the ECC in April 2008 and since their establishment the coalition has collaborated with different organisations to develop better ways of recycling plastic waste. Also, they try to save the oceans from persistent organic pollutants.

This project was initiated to study and clean up the garbage patch until 2009.

junkraft.com
With a trans-Pacific sailing voyage from June to August in 2008 the JUNK Raft project tried to attract people's attention and make them care more about the plastic in the Pacific Ocean. This concept was organised by the Algalita Marine Research Foundation.

The SEAPLEX expedition consisted of explorers from Scripps Institution of Oceanography, who stayed on a raft for 19 days in August 2009 researching the patch. Their chief task was to detect the size and distribution of plastic in the whirl. 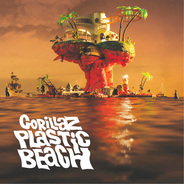 Now as a British Pop/Hip-Hop/Electronic Band the Gorillaz are not really an aid agency but they made an album about the exact same topic this website is about: the pollution of the oceans of the world.
Featuring famous artists like Lou Reed, Snoop Dogg and many others the album made it to the Top Ten in several countries. And if selling 74,000 copies in the first week after the release in just the U.K. cannot be called 'getting people's attention' we don't know what can.

The Majestic Plastic Bag - A Mockumentary

If you have read up to here watch the video. If you have not, scroll up and read the text before watching the video. It shows a plastic bag making its way from a city to the great Pacific garbage patch