During the last years sushi has become a new global food trend. But..

What actually is sushi?

Sushi is a Japanese food consisting of cooked vinegared rice garnished with other ingredients, especially with raw fish or other seafood.

The evolutionary history of sushi

Although sushi is treated as a modern kind of food and is sometimes even called the food of the 21st century, the development process of sushi started over a thousand years ago.

The evolutionary history of sushi is based on a new preservation method which was evolved during the 9th century in the Southeast of Asia. Ever since people used cooked rice to conserve fresh fish but in the end only the fish was eaten and the fermented rice was discarded. Because of this preservation method the fish was still edible after one year. For this reason the method got very popular and spread to China and Japan. 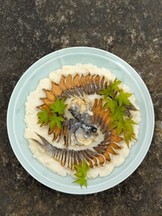 Narezushi
During the 14th century Japanese people enhanced the preservation method by adding rice vinegar to the cooked rice which had the effect that the fermentation process was shortened and the shelf life of the conserved fish increased.
Furthermore, even the taste of the rice got better and that is the reason why they started to eat the rice as well.
The combination of fermented fish and vinegared rice was from now on called "Narezushi" and is accordingly the pioneer of today's sushi. 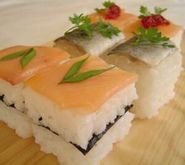 Oshizushi
Since they had found out about the advantages of rice vinegar, the Japanese people started to reduce the fermentation of fish until then they eventually abandoned it by evolving a new method.
From now on they pressed the the vinegared rice with the seafood together by using wooden moulds. 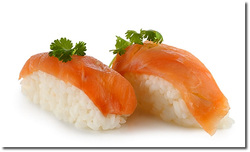 Edomae Nigirizushi
Only during the mid-18th century did a Japanese man called Hanaya Yohei,  invent the "Edomae Nigirizushi" which is very similar to the  sushi we are used to in our days. Because like we do it today, he served sliced fish on freshly cooked vinegared rice balls as well.
However, there is one big difference between today's sushi and his because at his time Mr Yohei didn´t have the possibility of refrigerating the fresh fish, so he had to cook or marinate it because otherwise the fish could have perished during a very short time.
During the first years after Mr Yohei had invented sushi, it wasn´t treated as prestigious food. It was rather an early form of fast food, which was sold next to the port. However, the development process of sushi proceeded and after a while the Japanese changed the format of sushi in order to bring the simple combinations of everyday food to another level - sushi became an art form!
From now on you could only get sushi as good quality food in small portions and solely at restaurants.

From East to West - the development of sushi

Sushi got more and more popular in its country of origin. But the enthusiasm for sushi was infectious because a few little sushi restaurants, which were established during the beginning of the 20th century in the USA, and were actually aimed at a Japanese clientele, were visited by many Americans as well. Because of that the first real sushi restaurant in the western world was opened in Los Angeles in 1966.
After that it didn´t take much time until the Americans assimilated sushi into their own culture.
Since sushi has extremely evolved in the USA, it has actually come into its own style and culture in the United States as the Americans changed the shape, size and presentation and made the taste of the sushi rice a little sweeter.
Moreover, they put more emphasis on the quantity of sushi and less the quality whereby "Happy Hour" came into being.
But change is not always bad because this evolved sushi has now traveled back to Japan to become trendy American sushi.

How did sushi get as popular as it is now?

At the beginning of the trend, the Western people were attracted by the appearance of the „little pieces of art“ called Sushi. The gay colours, the various flavours and forms combined with the sensation of taste were a completely new innovation coming from Asia.
In addition, Sushi is very healthy since it is low in fat and provides a welcome change from other unhealthy fast food. But indeed, not everybody likes sushi, either you love it or you hate it. 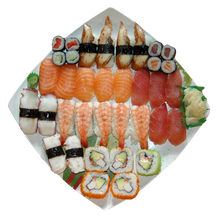 Sushi as a fast food 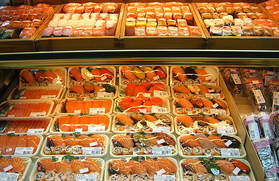 10 years ago, Sushi was an exotic delicacy and rather expensive. Today, there are sushi bars on every corner. Even at the supermarket you find deep frozen sushi ready to be eaten. In Berlin, there exist more than 200 sushi bars and the food gets cheaper and cheaper due to the happy hours and the developed mass production. As a result, the quality has decreased and sushi contains more and more chemical products in order to conserve it, although they are bad for our health. In the end, Sushi has become a convenience food.

Consequences of the sushi trend 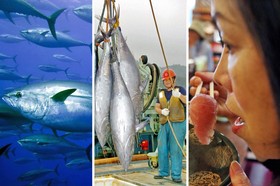 Apart from the change from a luxury product into „fast food“, there are other consequences as well. One example is overfishing. In a few years, whole fish species, such as the bluefin tuna, will be killed off. At present, the supply of tuna has decreased to about 80 % compared to the last decades. The extermination of a species is fatal for the entire ecosystem „ocean“, since the species' spectrum is altered and provokes an augmentation of jellyfish. This in turn leads to a diminuation of fish species.

How to solve the problem?

Vegetarian sushi
Sushi is a trend that will not go away anytime soon and it is not even our ambition to stop the consumption of sushi, it is rather to make you aware of the consequences and dangers concerning the „sushi mania“. However, we advise you to avoid eating tuna and to pay attention to the quality of the sushi you buy. As we have already mentioned, there is a big variety of sushi and tuna can be perfectly replaced by other seafood or, even better, by vegetables.
We are sure that there will be a solution which is to everyone's taste because sometimes you just can´t beat the simple things!