Tourism in the Dominican Republic

The Dominican Republic has a tropical climate with high humidity. The temperature is in the range of 26-30 degrees and never drops below 21 degrees. Accordingly the water temperatures in the Atlantic Ocean or Caribbean Sea are warm and constant throughout the year between 26 to 28 degrees. With his 1500 km white sand beaches, the turquois water  and the warm temperatures it is the perfect holiday destination.
But the Dominican republic has more than just beautiful beaches. No country in the Caribbean offers so many different attractions. There are activities in nature, eco-tourism, beach, sports activities and cultural aspects, 80 national parks, the old town of Santo Domingo and protected areas.
Nearly a third of the total area of the Dominican Republic is under protection. Tourists can marvel at the flora and fauna in one of the many National parcs. Due to the Miles of beautiful beaches and the varied nature the Dominican Republic offers ideal conditions for Tourists. The Dominican Republic is visited by nearly four million people every year. Most of them come from Canada or the USA, but also a lot Europeens spend their holidays there. Tourist Centres are in the East( Punta Cana, Bavaro), in the South, North and on the peninsula Samara.

The following figure shows the continuous increase in the number of visitors to the Dominican Republic in the course of their tourism development. 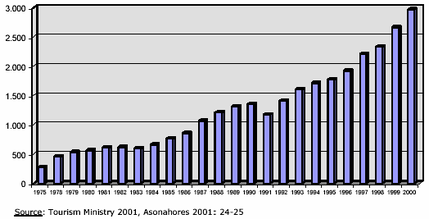 In the last 20 years  tourism has become one of the most important sectors of the Dominican economy. It became the most important source of foreign exchange income. Tourism became a profitable alternative for sugar export, which had fallen into a crisis, as the agriculture and the areas were poorly developed.  More and more food was needed to feed the population.  Industrialization occurred. Industrial parks and tourism began to develop. The Dominican Republic has the highest economic growth rate of Latin America. However, this economic boom did not reach the Dominicans as  the natives impoverished increasingly . Few tourists travel to the streets in the country or visit Santo Domingo, most of them go to tourist centers which were specially built for them. These  All-inclusive systems are designed so that the tourist is not compelled to leave the spacious  hotel complex . This led to a disadvantage and disappointment in the Dominican population. Tourism earnings go to foreign investors and Competitiveness of small Dominican businesses  is therefore poorly. The Dominican environment minister  also comments on that: "The all-inclusive tourism must be limited to a few systems. More money needs to stay in the country so that the people and the nature benefit . "

There were conflicts between the hotel companies and the rural population. The big companies do not want to share  the business with the rural small business and are not willing to integrate them into tourism.
The large tourist groups believe that they are the great benefactor, because they provide work in their big rigs. They do not understand that small business owners should have to share in their business so that their families can benefit. They keep most of the profits. They do not understand that a tourist who is being treated well by the locals, makes other tourists following him, which would be a benefit for everybody.

Nearly 70 percent of the hotel buildings are located in only two of the 32 Dominican provinces, in La Altagracia and Puerto Plata. The proportion of people living in poverty, both in Puerto Plata and La Altagracia is higher than in the rest of the country. Also in the area of education the tourist provinces cut worse compared to the rest of the country . Tourism has led to social and economic exclusion of the population, which could not benefit from the growth of this sector.

At the end of the 90s the Dominican Republic became a cheap travel destination. Tourists covered a distance of 8000km by plane.  As they  fly another, longer route, as e.g. other holiday locations such as Spain, the greenhouse gas emissions increased by 4 times. Other environmental damages  are salinisation of groundwater, damage of coral reefs and mangroves, and enormous water consumption.
Pollution of the water, the air and of the soil has an impact in society and social level. Thus, there is a shortage of basic food and sanitary problems which leads to health problems.

The collaboration between the hotel industry and the local community is an important prerequisite for the development of sustainable tourism. Hotels should also help ensure that the use of products from the region, farmers, craftsmen and fishermen is promoted. They should offer Dominican cuisine in the hotel's restaurants and a Dominican cultural offer for guests. The increasing globalization of the tourism industry does not necessarily presuppose this, but these facts are important to create a strongly tourism in the Dominican Republic. Aim of a sustainable marketing strategy is to elate nature and outdoor vacationers. Excursions and round trips guide tourists to areas beyond the beach areals. This would promote the economic development in regions away from the tourist centers and more natives are able to participate in tourism which would lead to better life circumstances and more stability for them. 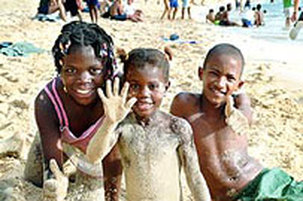