There are many global trends in culture nowadays but all of them are spread through the media. One phenomenon of global trends are music casting shows which are mass producers of "stars".
The purpose of these shows is to find the most talented singers from all over the nation and make them famous.The winner/s release an album and get a recording contract.
We have chosen the two global examples POPSTARS and X-Factor.

The system of the show consists of five stages: the castings, the recall, the workshops, the band house and the final live show.
First are the castings where you sing the first time in front of the judges who decide whether you can come again.
The next day at the recall you perform a given song which had to be learned over night. The contestants who succeeded the recall have the chance to learn from experts in small groups during the workshops. Every week they have to perform in front of the judges and prove themselves.
In the band house the best ones are trained and reduced to a certain number.
In the final live show fans support their candidates with their applause and are able to choose the last member of the band with their telephone vote.

TrueBliss first winners (www.tribe-cast.com)
Popstars was created by the Producer Jonathan Dowling and is the precursor of Simon Fullers Pop Idol.
The first season aired in 1999 in New Zealand formed a five member all-girl group named "TrueBliss".
The format was sold to more than 50 countries.

There have been 35 shows from 36 countries that were broadcast in over 50 countries of the world (see below).
As of September 2012 75 bands were formed.

Countries which had a version of Popstars(upload.wikimedia.org) 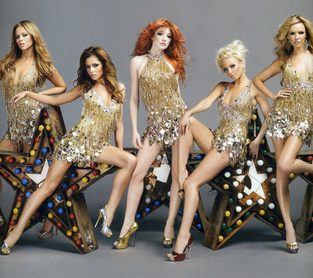 Girls Aloud, winner 2002 (mariuze.blogspot.de)
Popstars is one of the most successful TV formats of all time with being sold to more than 50 countries.
Starting successfully in most of the countries in the early 2000s, it soon began to fail and was dropped after a few seasons because of its gradual loss of viewers.
The last country where Popstars was broadcast was Germany. There it was aired until autumn 2012.

The winners of 2002, the girl group "Girls Aloud", even won the wold record of being the "Most Successful Reality TV Group" in 2007.
German Popstars Website

First are the producers' auditions where you sing in front of the producers who pick out the best performers. These are "open" auditions that anyone can attend.
Months after that you can sing infront of the judges at judges' auditions.
The contestants who succeeded the auditions have the chance to learn from experts during boot camp. Every week the candidates who developed least have to leave.
In the judges' house the best ones are trained for the live shows.
At the live shows fans can support their candidates with their applause and in the last shows by  telephone voting.

X-Factor was created by Simon Cowell, a  British television producer who is also one of the founders of "Britain's Got Talent" and is well known for being a judge in several other music casting shows e.g. "American Idol".
The first season aired on 4 September 2004 in the United Kingdom.
He sold the format of the programme to countries all over the world.

There are 40 different shows in over 50 countries spread all over the world (see below).
As of November 2012 there have been 74 winners of The X-Factor.

Spread of The X Factor (upload.wikimedia.org)
Own version
Joint version 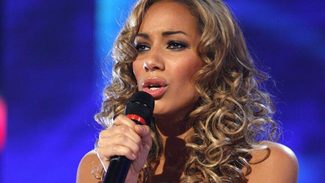 Leona Lewis, winner of 2006 (cdn-wac.emirates247.com)
The X-Factor is one of the most popular music casting shows. There have been many celebrity judges like Britney Spears, Nicole Scherzinger, Kelly Rowland and Ronan Keating.
The most recent winner is Samantha Jade from Australia.

The most internationally successful winner is Leona Lewis who won 2006 in the UK Version.

These music casting shows are very successful in economic and entertainment aspects because of their high audience ratings, but seldom in artistic aspects. Many young people try to pursue their dreams through them. They could truly learn from a show but are also used to make profit. Most of the winners disappear very quickly from the spotlight.