The Story of Fair Trade 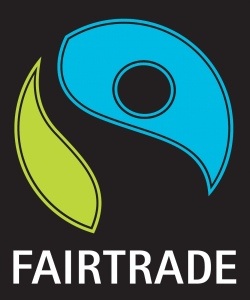 The first movement based on creating fairer trade circumstances was founded first in 1946 in the United States.  At this time Protestant churches founded what was then meant to be charity organisations selling handmade crafts.
In 1958 the first Fair Trade Shop opened in the United States.
In 1968 the first Fair Trade Shop was founded in Europe, respectively in the Netherlands. In that decade, in fact in the  sixties and seventies, we can notice a rising awareness against mass production and the consequences of globalisation on the food market. Movements like the 'European fair trade movement', 'Trade not aid' were soon to be acknowledged by the United Nations Conference on Trade and Development (UNCTAD).

In the eighties a stagnation of sales figures resulted in a modification of the concept of fair trade which until then was based on selling handcrafts.
Soon Fair Trade included groceries that could be bought at ordinary supermarkets to reach the common crowd and expand the dimension of that movement.
International minor organisations started coorporating by implementing Fair Trade labels to visibly mark the products. In 2001 all 17 organisations agreed on one common label, as seen on the right.
Until now there is an increasing growth in revenues, namely in 2005  Fair trade products yielded 660 Mio Euro, which means an increase of 20% per year. 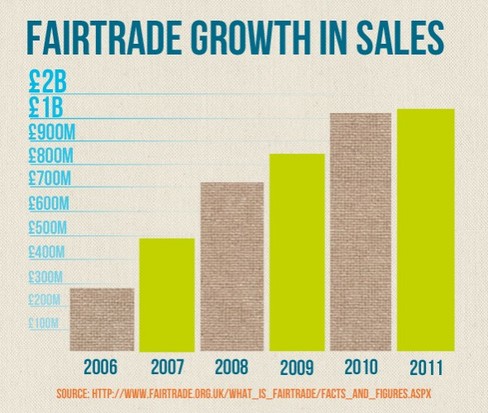 This bar chart drawn from the official UK website displays the growth of sales figures during the years 2006 to 2011.

Regardless of the fact that the currency is obviously given in pounds, during a period time of 5 years the revenue almost quadrupled.

The chart displays a steady increase of sales, which is very likely a positive result concerning the improved concept as mentioned before.

It is also an indication that fair trade is now reaching a broader crowd and thus achieving to raise public awareness.
The increase of revenues is so to speak  financial support, since more income allows  for a better capacity to act. 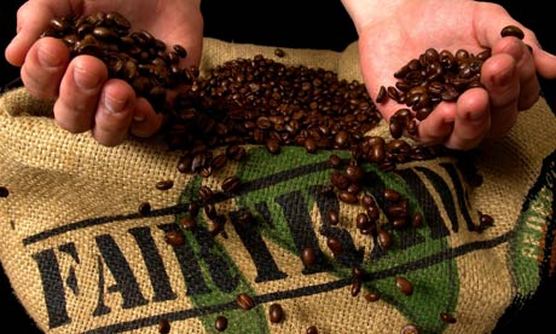 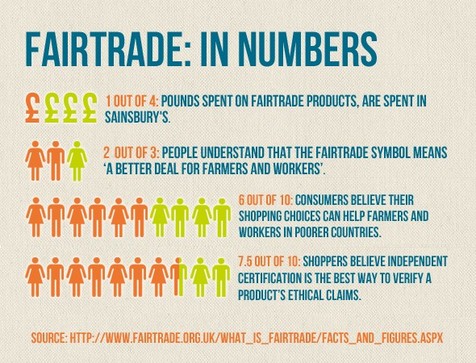 Fair Trade plays an increasing role in the food and agricultural industry. It relies on the power of the consumer to make a difference. The smart idea behind it is that every person inevitably needs groceries, so why not give them the choice to consume daily products more consciously. It is a win-win situation for the consumer as well as for the producer.
This idea could reach everyone, there is a slight price difference but these couple of cents can be seen as a donation while guaranteeing a product of high quality.
The graphic above displays public consciousness in regard to the significance of Fair Trade. Only two-thirds of the people (namely in the UK) are aware that the FairTrade label improves working conditions.
After all, more than half the people believe in the beneficial effects of purchasing Fair Trade products.


All in all, it can be said that over the past decade, public awareness has risen in terms of Fair Trade. There is a clear tendency towards the consumption of organic products as well as the trend of being more environmentally conscious. If the increase  of success of Fair Trade continued steadily, it would make a huge difference or even reform the food and agricultural industry as far as obligatory conditions and wages for Third World farmers are concerned.
Until then, it is impressive to take note of the rise of an internationally united organization to become that influential due to small consumer decisions all over the world to improve on other people's lives in Third World countries.